Ginger Cats: What makes them unique is beyond coat-deep 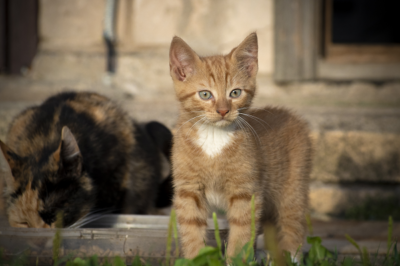 For ages, people have claimed that a cat’s appearance and behavior depend on its breed. But how helpful is this considering that 98% of cats aren’t purebred but rather an amalgamation of several breeds over multiple generations, now referred to as ‘domestic shorthaired’ cats (or medium or longhaired).

People who have had several cats swear there is another factor contributing to physical traits and temperament—coat color. Tortoiseshell cats (black, brown, and orange) are labeled as having “tortitude”, while grey tabby cats are often considered more easygoing. Most of these stereotypes are not true, but the genes contributing to their coat color have been linked to other unique qualities that are true; for example, more than 99% of tortoiseshell cats are female.

Since National Ginger Cat Appreciation Day is today, let’s look at what makes the orange, marmalade, peach, and apricot cats different from others. Some of these qualities have been confirmed in DNA research and somewhat in perception-based studies.

Approximately 80% of ginger cats are male.
To be ginger, a male kitten only needs to inherit the “orange” gene from his mother. Females, however, need to receive copies of the gene from both parents, and the more copies of the gene she inherits, the more ginger she will be. Females with orange in their coats are more often tortoiseshells and calicos.

Around two years of age, their trademark freckles start coming in.
Many orange cats develop adorable black spots on their noses and mouths. This results from lentigo, a genetic condition that increases the number of pigment-producing cells. These freckles can also develop in tortoiseshells and calicos—it’s all about that ginger gene! These spots are cosmetic, and nothing to worry about but can mimic or mask other skin problems, so if you notice any changes, your veterinarian should have a look.

Ginger cats are perceived to be friendlier and more affectionate with humans.
A study conducted in 2012 revealed that based on cat owner perception, gingers are regarded as the most affectionate with their guardians and have been lovingly dubbed ‘Velcro cats’! Ginger cats love to sit on their humans’ laps and even nap on their shoulders. They give plenty of headbutts, nose boops, and kisses, even with unfamiliar people (provided they are treated respectfully).

Female ginger cats, however, are considered aggressive and irritable.
The study didn’t consider gender, so three years later, a similar but more extensive study was done to determine if gender made any difference. According to owner responses, female cats with orange in their coats are considered the most aggressive and irritable toward unfamiliar people, mainly when being handled.

The pigment pheomelanin, present in cats with orange hues, is the same one that gives humans ginger hair, and science has shown that redheaded women have a lower tolerance to pain and discomfort. There is speculation that it affects female cats similarly; perhaps they are more cautious with people they don’t know well.

Orange and tricolored female cats can still be wonderful pets—their owners also claim they are very loving toward household members and more trainable than cats without the orange factor.

How to appreciate your ginger kitty:

Note: This article, written by LifeLearn Animal Health (LifeLearn Inc.) is licensed to this practice for the personal use of our clients. Any copying, printing or further distribution is prohibited without the express written permission of Lifelearn. Please note that the news information presented here is NOT a substitute for a proper consultation and/or clinical examination of your pet by a veterinarian.